The Fra Mauro worldmap
The world upside down 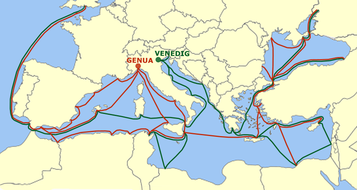 Figure 2: Trade routs of Venice in the middle ages
Fra Mauro did not travel the world by himself. He needed valuable information to create his map. Luckily he lived near Venice. Venice was in the middle ages a very important port, where many sailors and ships came to trade their valuable goods. Because Venice was such an important port people from all over the world would visit Venice. These people came from all around the world, from Europe, Asia and the Arabic countries. They  all visited Venice and not only to trade goods, but also to trade information about the world and how it looked like. Fra Mauro interviewed these sailors about their experiences and their geographical knowledge about the world. This new information used Fra Mauro for the creation of his map. The Republic of Venice played a great part in the creation of the map. Venice played her role as hub very well. With its great reach from all over the world Fra Mauro could possess a great deal of information which he used for the creation of one of the greatest monuments of the middle ages. The connection of Venice with Portugal was a great asset for Fra Mauro as well. Portugal supplied Fra Mauro with their latest travels and ports on the west coast of Africa. Venice provided Fra Mauro with precious information and showed with that her importance as a hub.
Not only Venice played a great role in the creation of the map, but two well-known merchants as well: Marco Polo and Niccolo da Conti. Both merchants travelled to the Asian continent. Marco Polo wrote a lot about china and mentions as first Japan (Cipangu). Niccolo da Conti wrote a lot about Asia and in particular about Bandan and Sondai (Indonesia). Fra Mauro used the travel accounts of both merchants to give an acurrate representation of the Asian Continent. Both merchants provided Fra Mauro with good information of the Asian continent and created a network relation between the east and west. We could consider Marco Polo and Niccolo da Conti as ‘brokers’ who connect two different networks, on both sides they provide with valuable information. Fra Mauro refers on his map several times to the contribution of the two merchants, with detailed information about trade sources like animals and customs. We can find these symbols on the map of Fra Mauro.
Besides the hub function of the Republic of Venice and the merchant’s ‘brokers’, Fra Mauro used also Arabic sources. This can been seen in the southern orientation of the map. If you look with modern eyes at the map it feels like the map is up-side-down. That is because of our modern perspective on the world. Modern maps are oriented to the north instead of the south. The Fra Mauro map is like many Arabic Maps oriented to the south for one simple reason; the Arabic’s didn’t care much which side was at the top of the map. In Europe the most maps where oriented to the east because of religious beliefs. In the east one can find the earthly paradise that was the main reason why the east was put at the top of the world in medieval Europe. With this orientation the earthly paradise was closest to God. Fra Mauro did not have this problem because he didn’t put the earthly paradise on the world map he put it in the left bottom corner.
​Conclusion 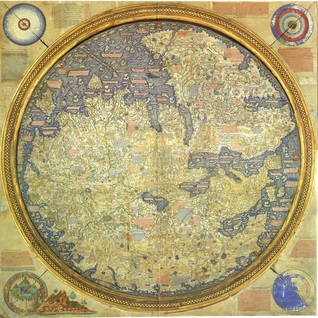 Figure 3: Fra Mauro world map
The monk Fra Mauro created in 1459 a world map which changed the world. Fra Mauro was not able to create this map without several networks. The networks who were the most important were the ones of the merchants who functioned as ‘brokers’ and created a connection between the east and west. Their detailed and accurate travel accounts of the Asian continent did not only describe the geographical details, but they described typical trade goods and customs for several countries. This helped Fra Mauro to produce an accurate rendition of the Asian continent not only in geographical sphere, but also some details of the animals and trade goods. Besides the ‘brokers’ the position of Venice in middle ages was a valuable asset to Fra Mauro. The connections of the Republic were very valuable to Fra Mauro in the creation of his map. Venice was one of the most important ports of that era and fulfilled its expectations as ‘hub’ for Fra Mauro. He pulled a lot of information out of its visitors to get an as wide as possible basis for its map. Beside that the Republic was visited by a lot of travelers it had great connections with other maritime empires as well, such as Portugal. Portugal provided Fra Mauro with their discoveries and their latest naval charts. Fra Mauro used some of his Arabic sources, mainly for the southern orientation of the map instead of the usual eastern orientation. This could also be explained as a realistic point of view, because Fra Mauro did not put the earthly paradise on the world map. Instead he put it in the left bottom corner.